This fascinating lecture on the paradox of choice [via video sift] by Swarthmore professor Barry Schwartz (who also has a book on the matter) is filled with hilarious insights into the intense neuroses and perfectionism sprouting from the explosion of choices in our culture, like: “With 100 different kinds of jeans on display, there is no excuse for failure,” and “Some choice is better than none, but it doesn’t follow from that that more choice is better than some choice […] I’m pretty much confident that we have long since passed the point where [more] options improve our welfare.” 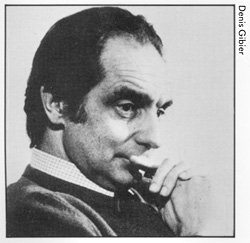 But Schwartz isn’t the first to advocate voluntary constraints as a path to freedom—the crazy French OuLiPo started dabbling in the delicious literary applications of the paradox of choice in the 1960s. OuLiPo stands for Ouvroir de Littérature Potentielle, or “workshop of potential literature,” consisting most famously of Raymond Queneau, Georges Perec, and Italo Calvino.

As wikipedia explains, OuLiPo members liked to use constraints, frequently with some mathematical significance, as “a means of triggering ideas and inspiration.” There’s Queneau’s Hundred Thousand Billion Poems, a book of ten sonnets (check out this brilliant javascript version) with each line on a separate strip of paper, so you can flip the paper to create 1014 different possible permutations of the lines, each of which is its own sonnet, and Calvino’s The Castle of Crossed Destinies, in which each part of the story is associated with a tarot card and an arrangement of the cards is provided to encourage readers to arrange the pieces in different orders than the initial linear presentation to get different stories.

Embedded video doesn’t work in RSS so you’ll have to go to the actual post.