In case you were wondering what pagan ritual our culture Christianized, then secularized, to come up today’s deliciously cheesy and hypothetically romantic Valentine’s Day: It’s Lupercalia.

According to wikipedia and this hilarious History Channel video, Lupercalia was celebrated in honor either of Lupercus, the god of the shephards who happened to raise the founders of Rome (in the form of a wolf), or Faunus, the Roman god of fertility.

Anyway, description of the usual activities of Lupercalia, from the wikipedia article:

The festival began with the sacrifice by the Luperci [the “brothers of the wolf (lupus)”, a corporation of priests of Faunus…] of two male goats and a dog. Next two patrician young Luperci were led to the altar, to be anointed on their foreheads with the sacrificial blood, which was wiped off the bloody knife with wool soaked in milk, after which they were expected to smile and laugh; the smearing of the forehead with blood probably refers to human sacrifice originally practised at the festival.

The sacrificial feast followed, after which the Luperci cut thongs from the skins of the victims, which were called Februa, dressed themselves in the skins of the sacrificed goats, in imitation of Lupercus, and ran round the walls of the old Palatine city, the line of which was marked with stones, with the thongs in their hands in two bands, striking the people who crowded near. Girls and young women would line up on their route to receive lashes from these whips. This was supposed to ensure fertility, prevent sterility in women and ease the pains of childbirth. This tradition itself may survive (Christianised, and shifted to Spring) in certain ritual Easter Monday whippings. 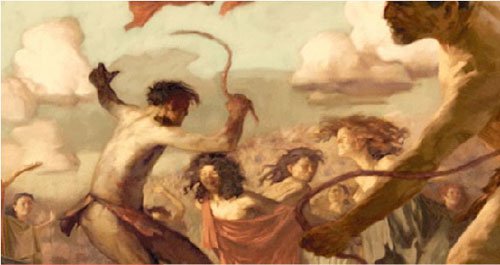 Well, ladies, we’ve come along way since mid-February was reserved for lashings! Happy Valentine’s Day! Don’t forget to save your secret geek crush one of these brilliant scientist valentines from ironic sans.