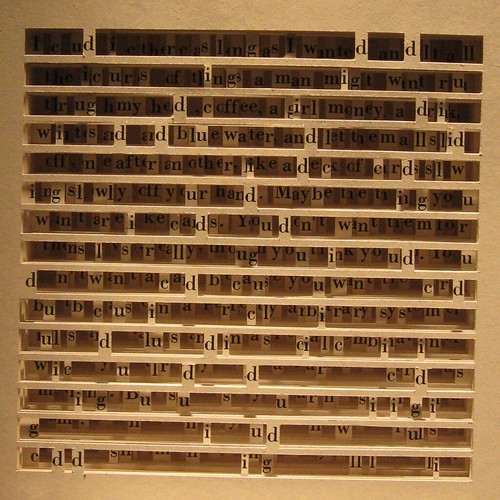 Wanting to experience language the way a computer does—as meaningless packets of information—Alex printed up 22 copies of his favorite passage of All the King’s Men and cut out all but every instance of a single letter on each sheet.

The finished product is 22 sheets of paper with seemingly random placements of a single letter that create the full passage when stacked on top of each other in any order.

The very best thing about this project—aside from the Brian Dettmer-esque OCD required to complete it—is that it’s basically the opposite of Raymond Queneau‘s Hundred Thousand Billion Poems (see this great interactive version). Each unit of Hundred Thousand Billion Poems has its own meaning, but reordering the strips destroys the original meaning of the original poem (and rarely produces new coherent meaning)—and in AL-gorithm each page has no human-decipherable meaning, but reordering them preserves the original text. Cool!

The only thing it needs is a better title. How ’bout a quote from Queneau? “Oh reader thinking thus your heart will lock.”