Wordsmith.org‘s A.Word.A.Day e-newsletter has had some awesome themes lately. First, there was words from the Irish in honor of Bloomsday, and this week they sent out five meta-words — words describing words and language — along with this great quote from John Locke:

So difficult it is to show the various meanings and imperfections of words when we have nothing else but words to do it with.

You tell ’em, Locke. And a few of the words we use in an attempt to show those meanings and imperfections:

grammatolatry (gram-uh-TOL-uh-tree): The worship of words: Regard for the letter while ignoring the spirit of something.

catachresis (kat-uh-KREE-sis): The misuse of words.

parapraxis (par-uh-PRAK-sis): A slip of the tongue (or pen) that reveals the unconscious mind.

lingua franca (LING-gwuh FRANGK-uh): A language that is widely used by speakers of different languages to communicate with one another. 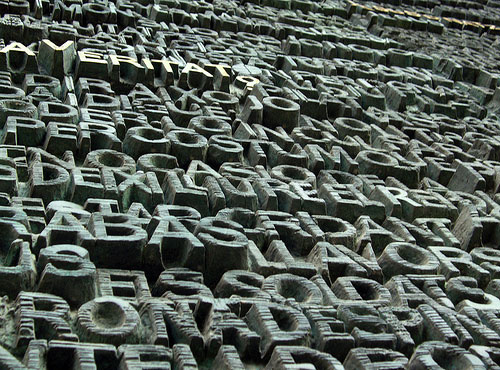 Some other great meta-words from Wordie user John‘s list of Word Words:

metathesis (muh-TATH-uh-sis): A linguistic process of transposition of sounds or syllables within a word or words within a sentence.

orthography (awr-THOG-ruh-fee): A method of representing the sounds of a language by written or printed symbols.

verbum dicendi: A word that expresses speech, introduces a quotation, or marks a transition to speech which may be considered non-standard.

onomatomania: Obsession with a particular word which the person uses repeatedly or which intrudes into consciousness. [ed. note: A year ago, I commented on the wordie page for onomatomania that I have this condition for kenspeckle.]

And even more meta-words from Wordie user alguien‘s list Words About Words:

chiasmus: Inversion in the second of two parallel phrases.

aposiopesis: Breaking off in the middle of a sentence.

zeugma: Use of a word to govern two or more words though appropriate to only one.

polyptoton: Repetition of a word in a different case or inflection in the same sentence.

tmesis: Separation of a word into two parts with other words occurring between them.